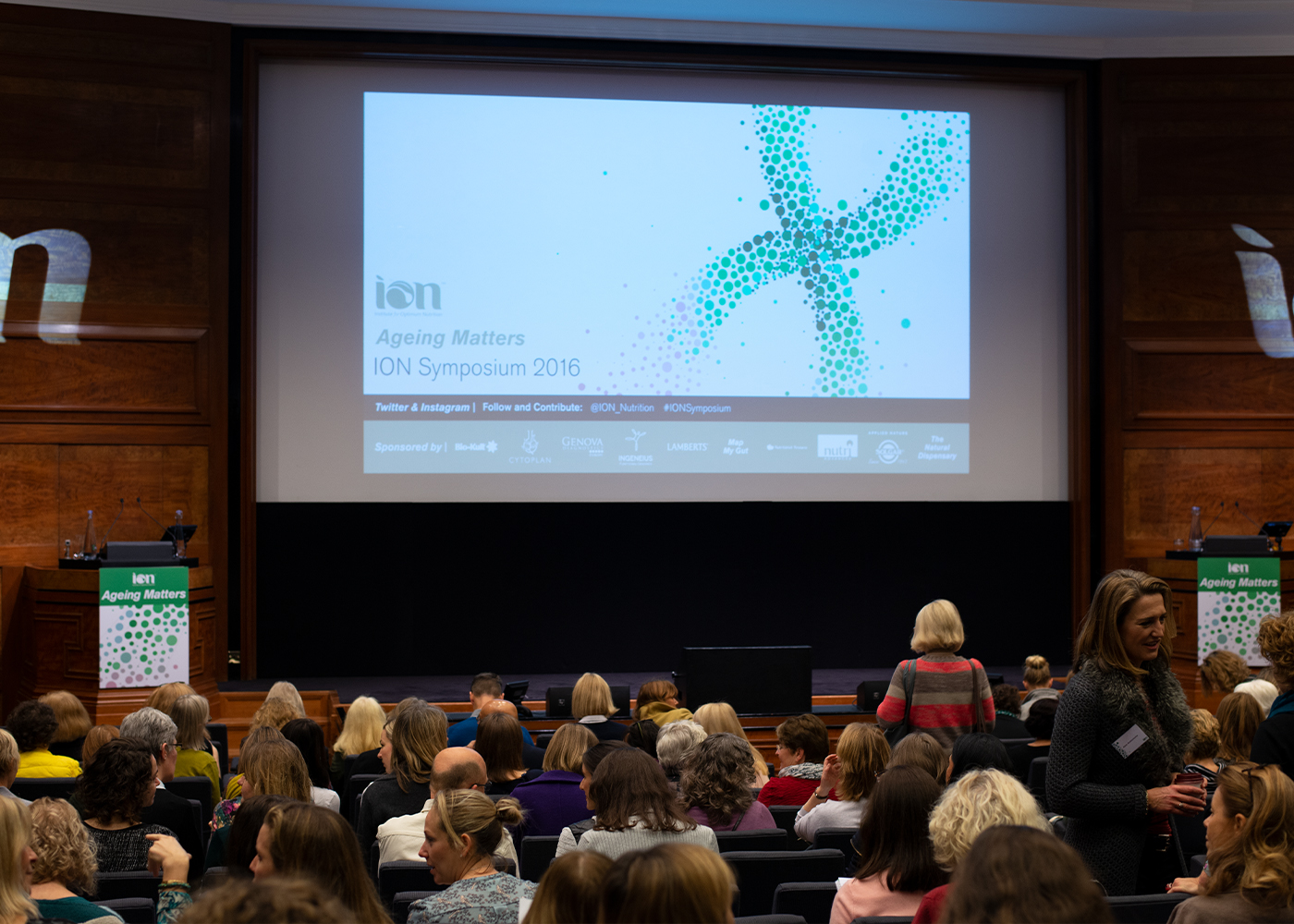 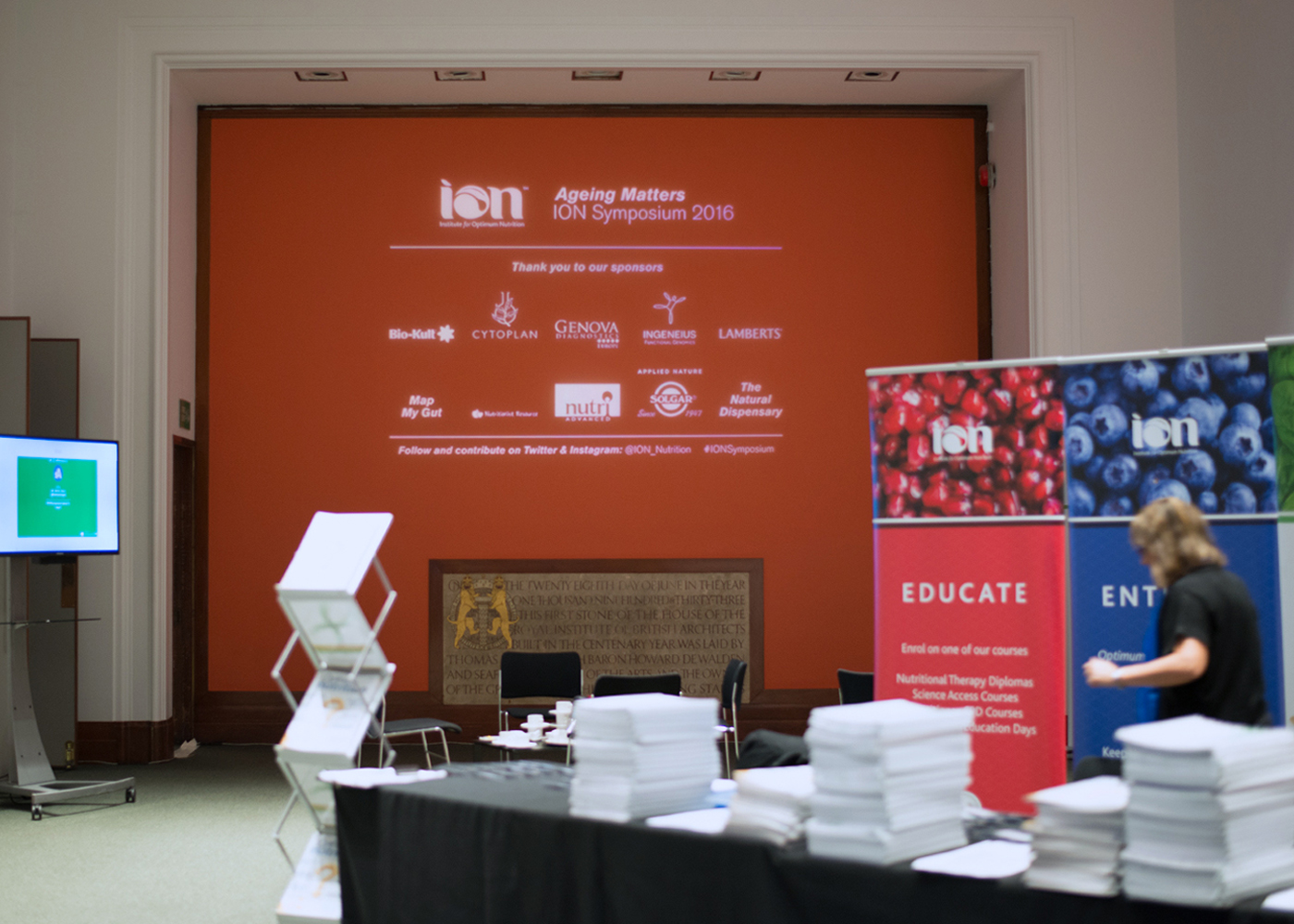 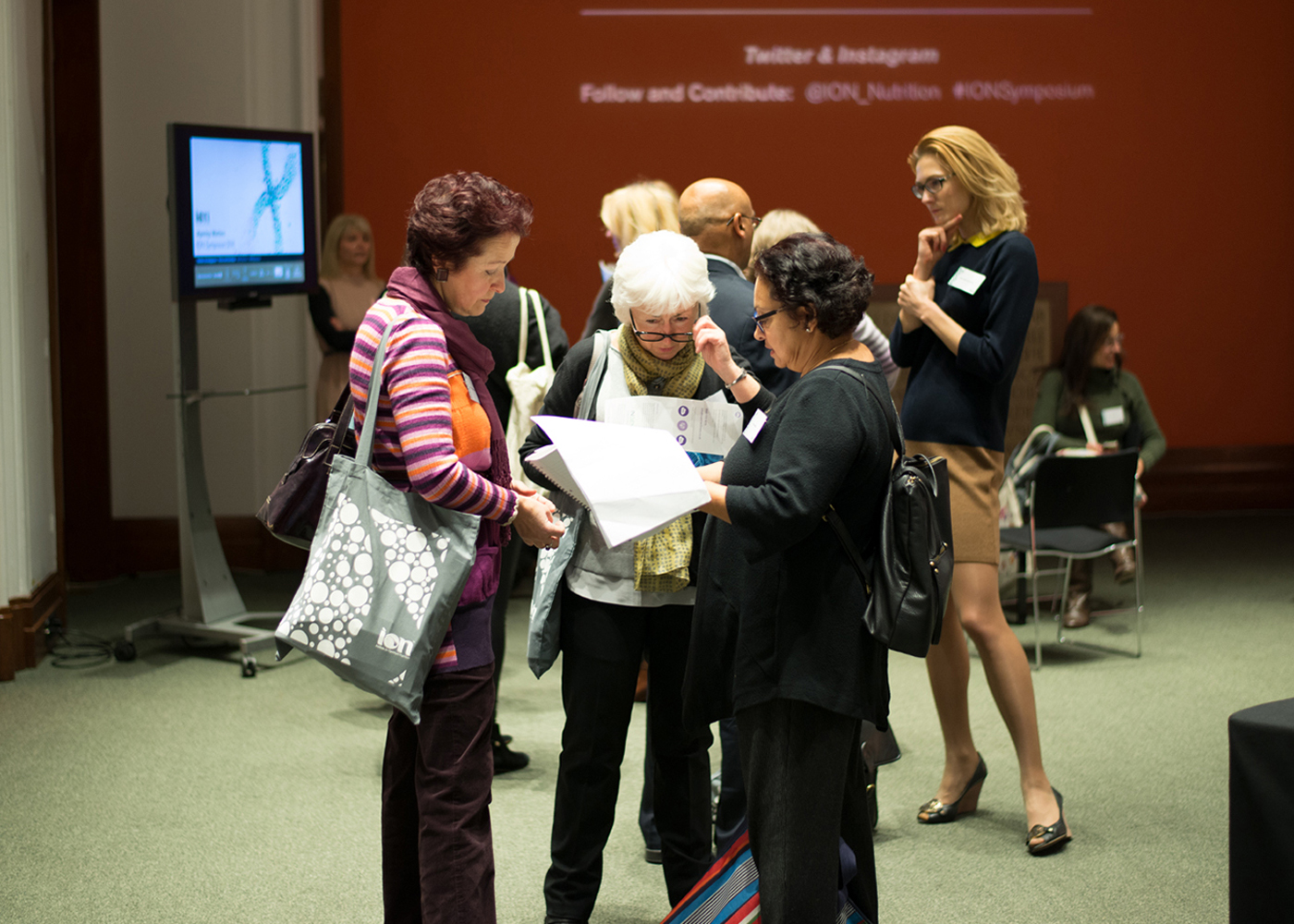 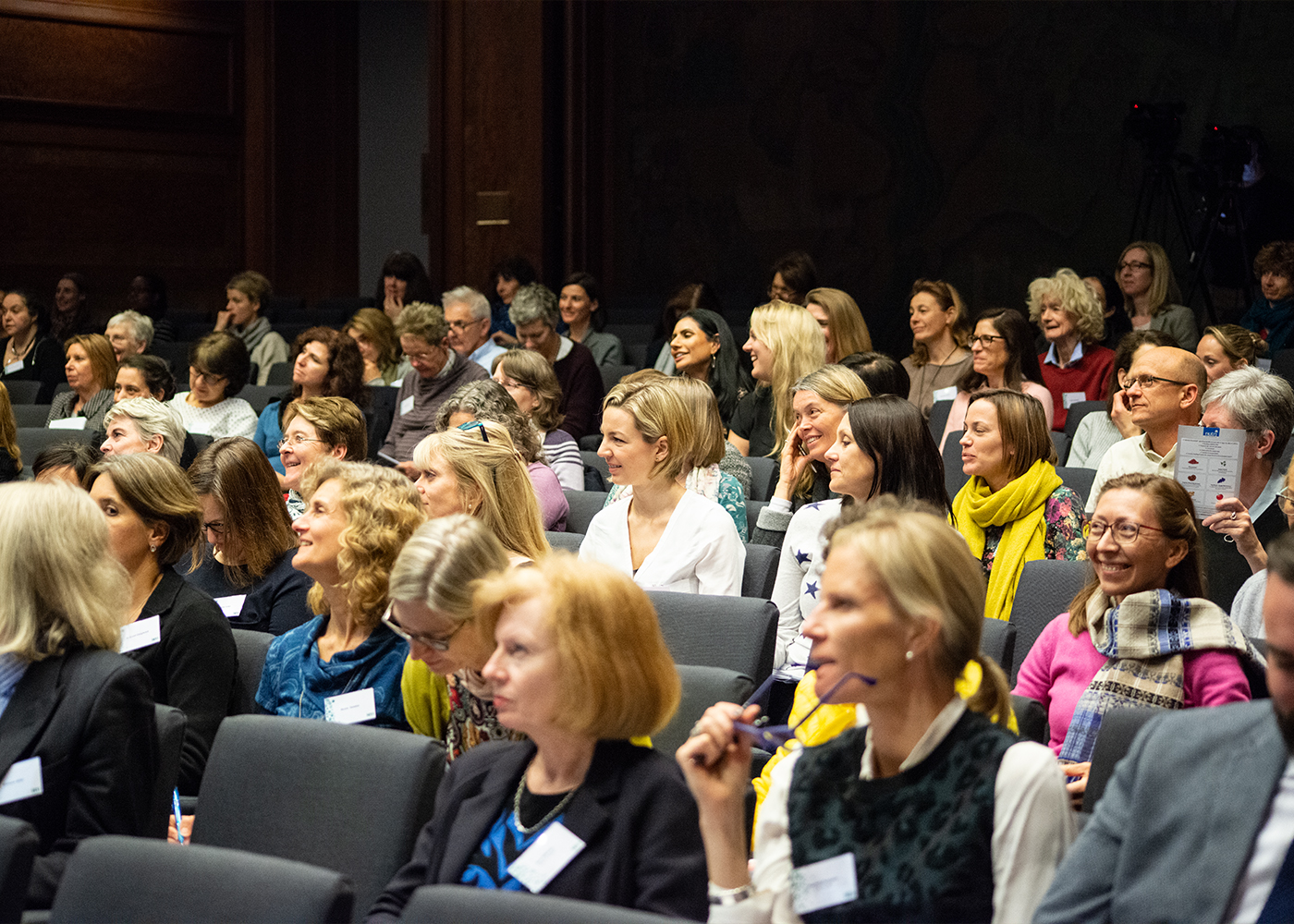 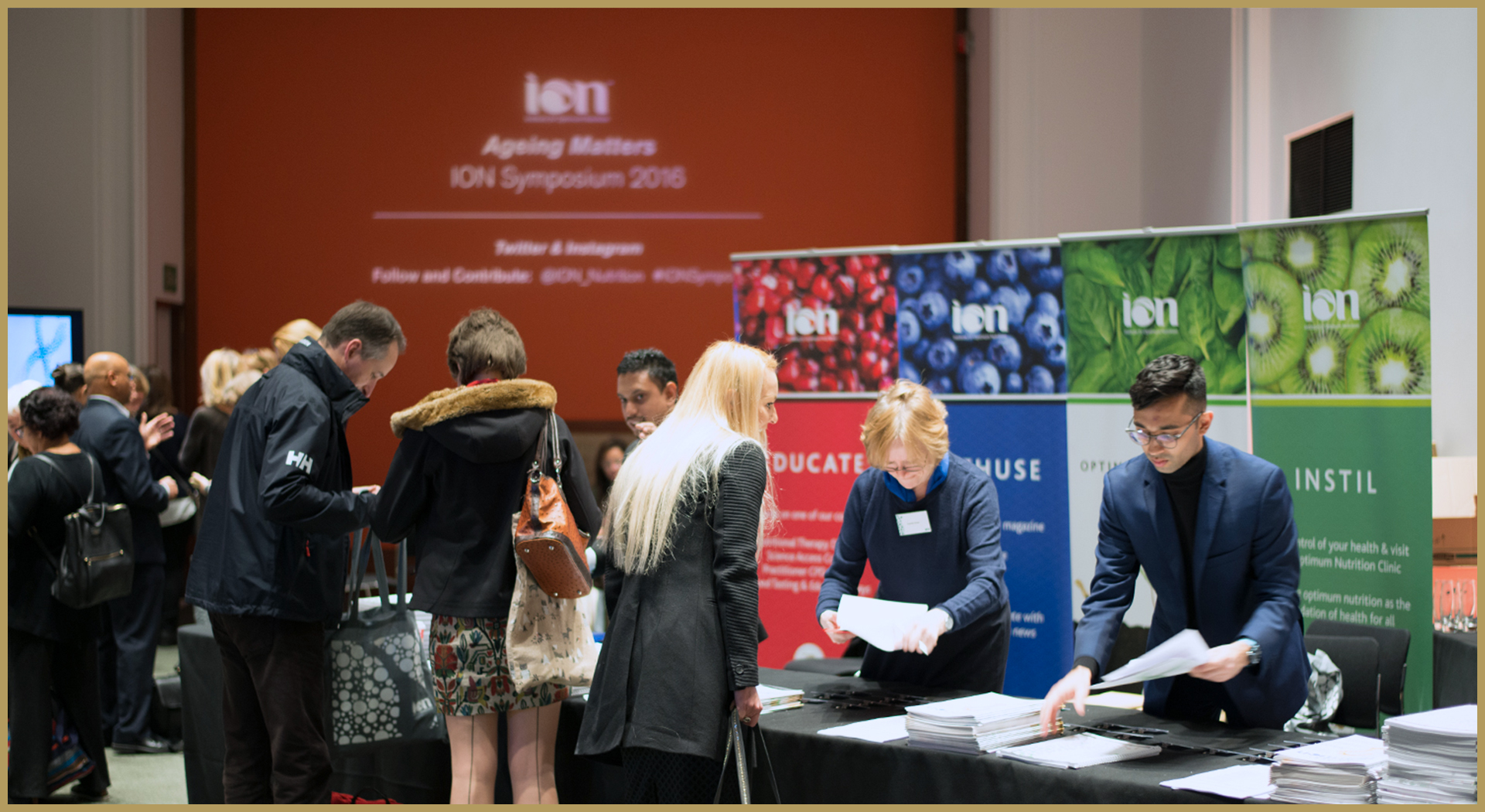 As this was the first symposium by ION, the sensible decision was taken to make the branding fit within the overall ION brand theme at the time (by making it “an extension of…” rather than a “standalone theme with the ION logo”).

I approached the Head of Short Courses (who is also a nutritional therapist) to understand “ageing” concepts from a nutrition and food point of view, and after some sessions we had brainstormed the idea to base the design on telomeres. These are structures located at the end of human DNA strands to protect our chromosomes (sort of like a cap on the end of a shoelace). With age these structures deteriorate, and this is accelerated through bad diet and lifestyle.

This is where the abstract “X” shape of the identity and gradient colour originates from. 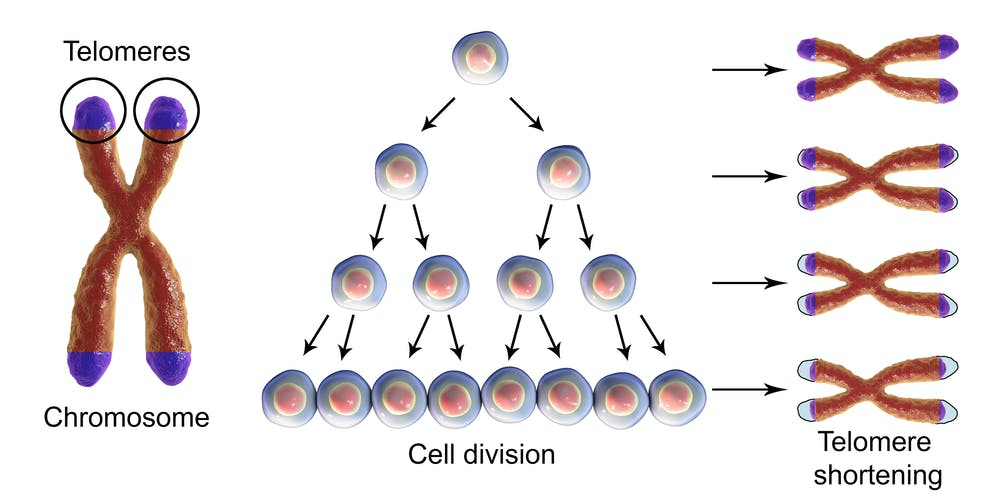 Further, I mentioned to the group that this symposium was bringing together various people to offer their thoughts on a subject matter, helping to plug knowledge gaps for other people. This is where the “circles concentrating into the centre” of the design stems from.

Lastly, the CEO, Dean, and Business Manager stated they would like to see the colour “gold” incorporated into the design, to reflect the prestigiousness of the event. 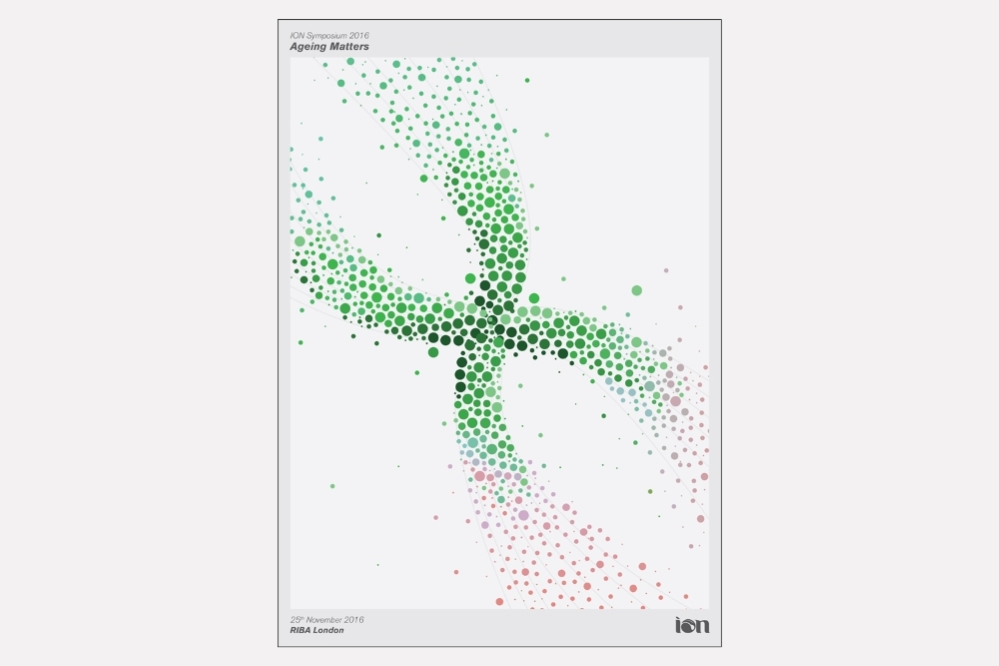 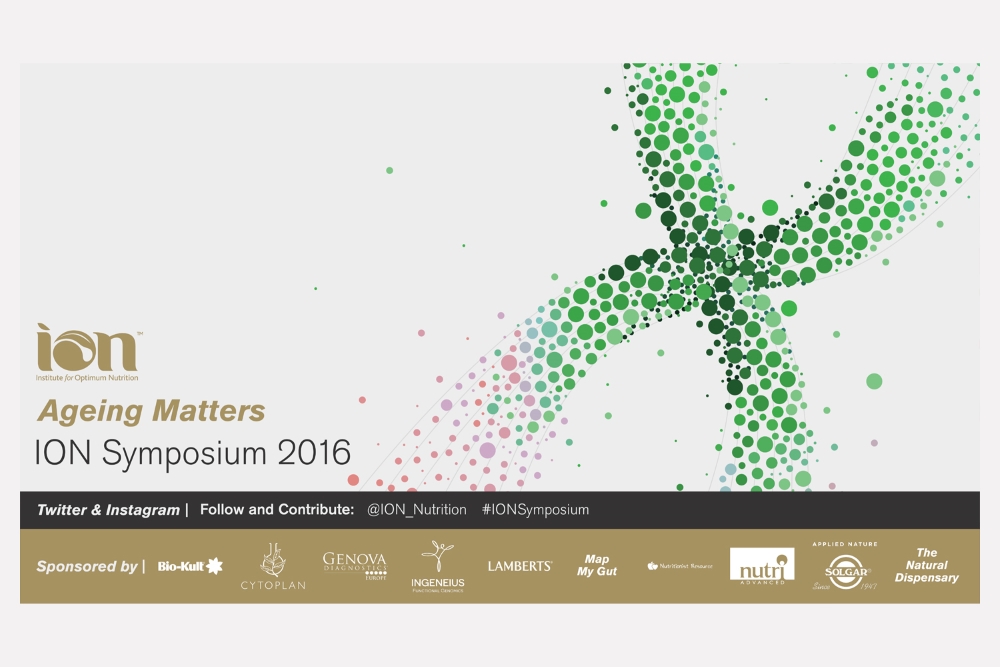 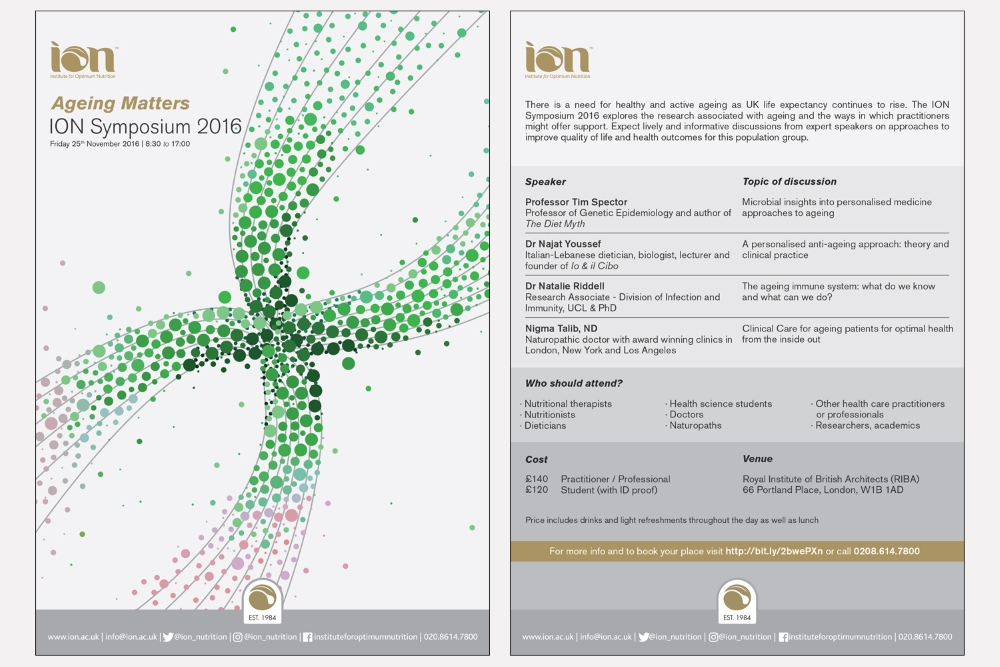 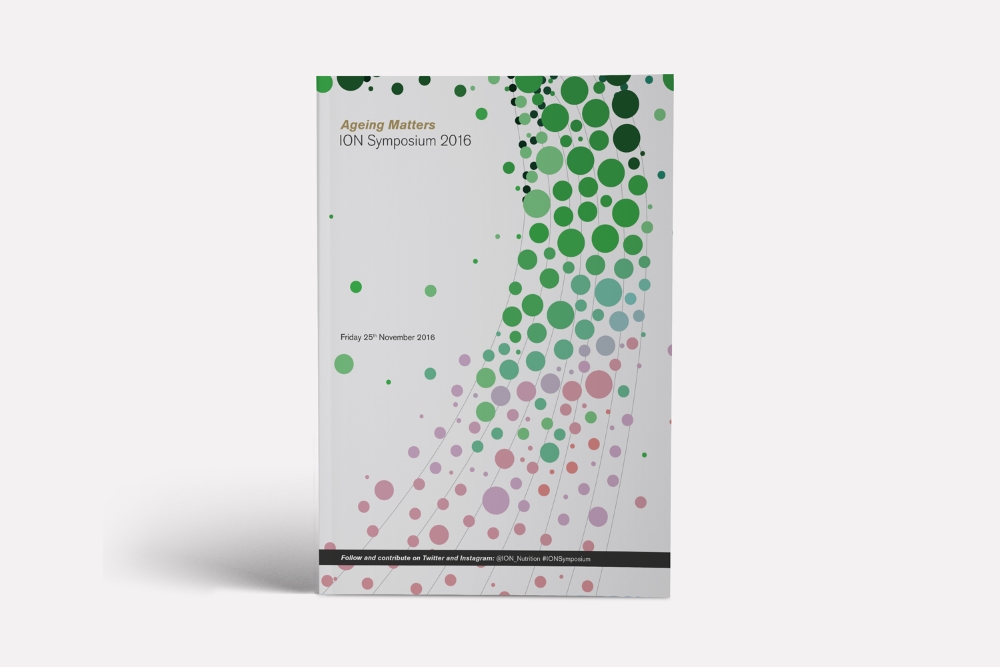 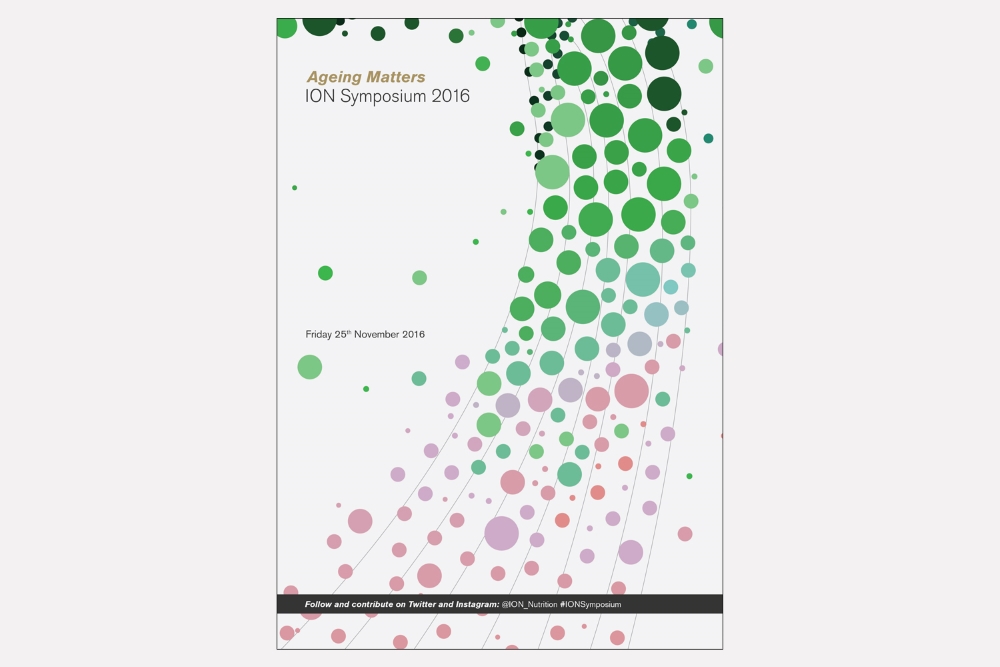 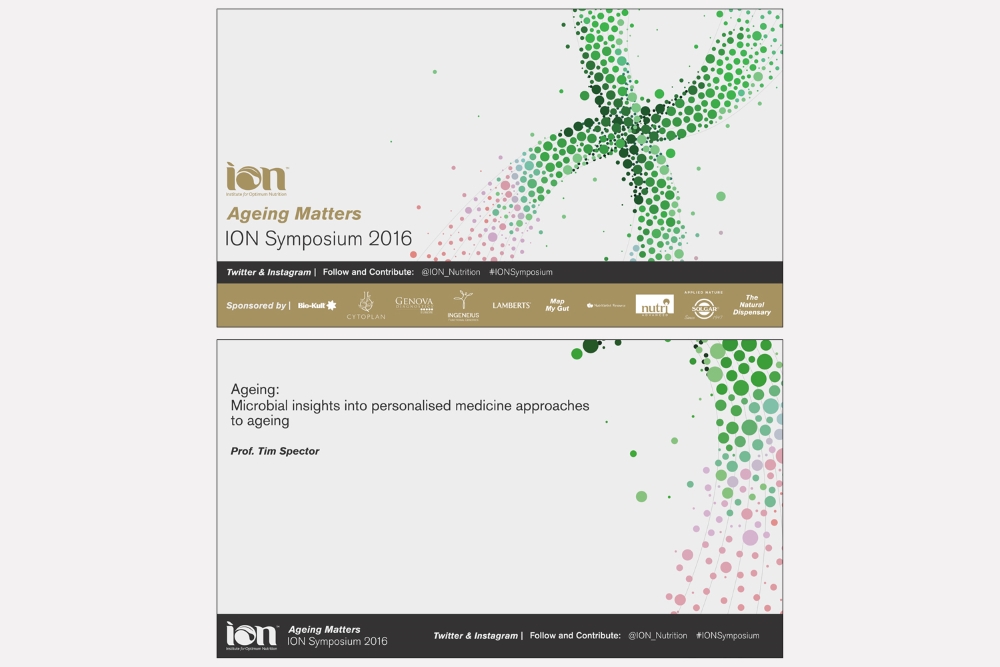 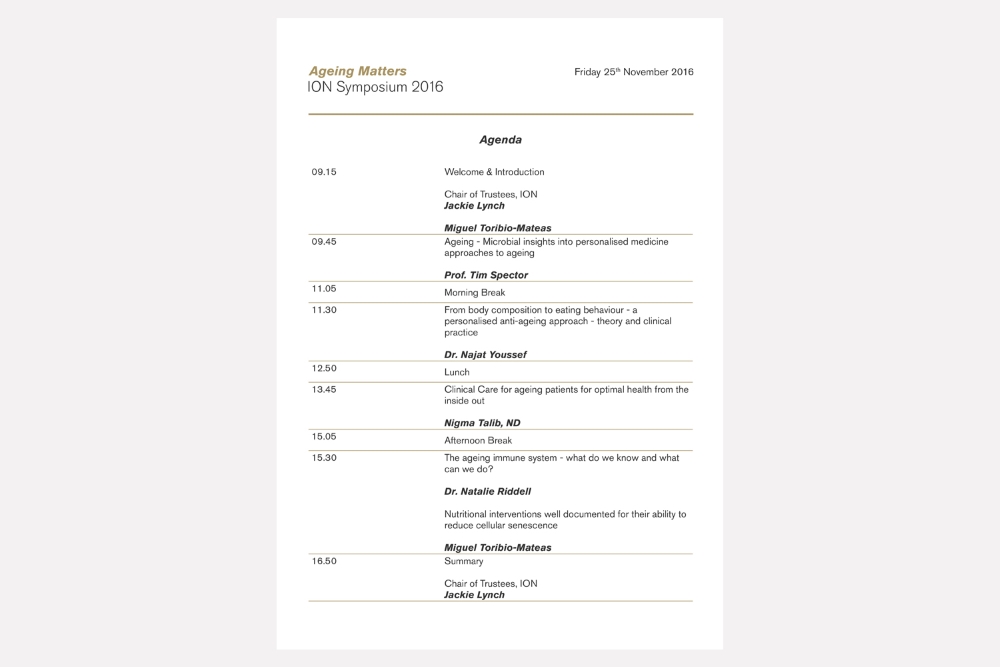 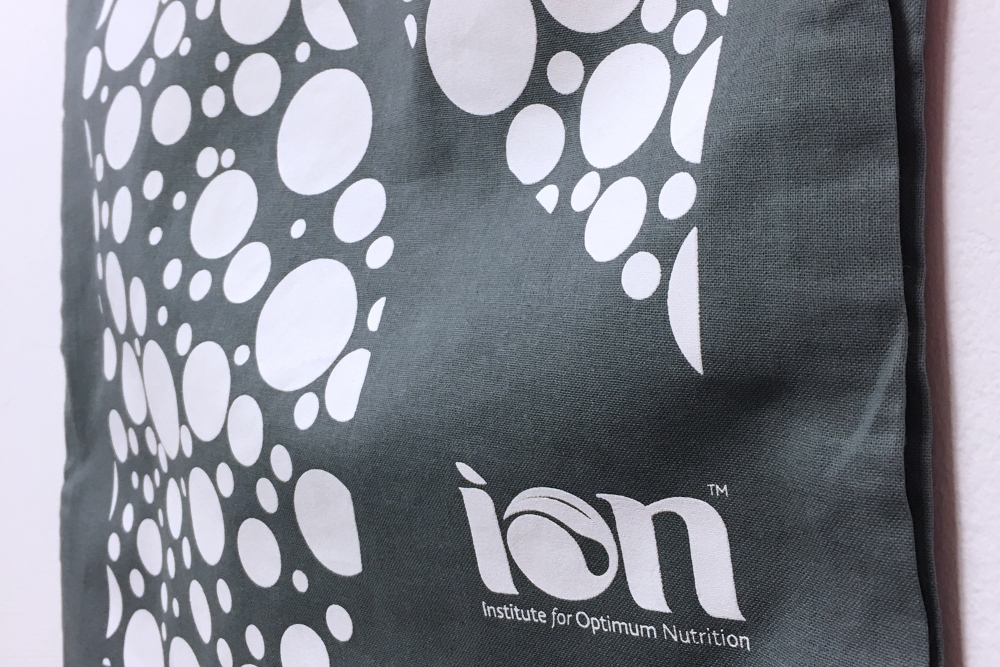 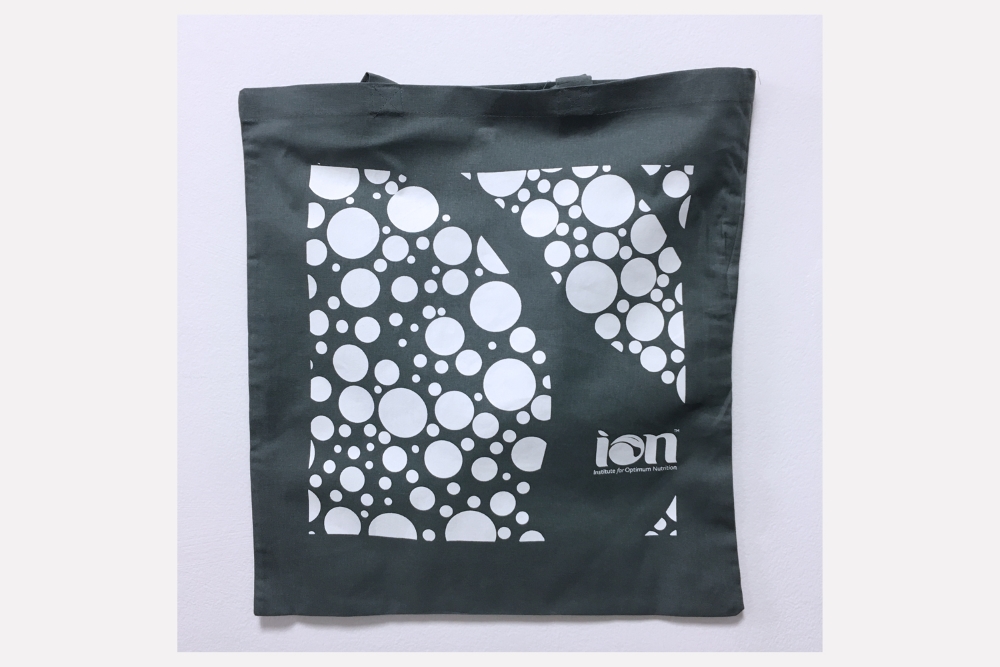 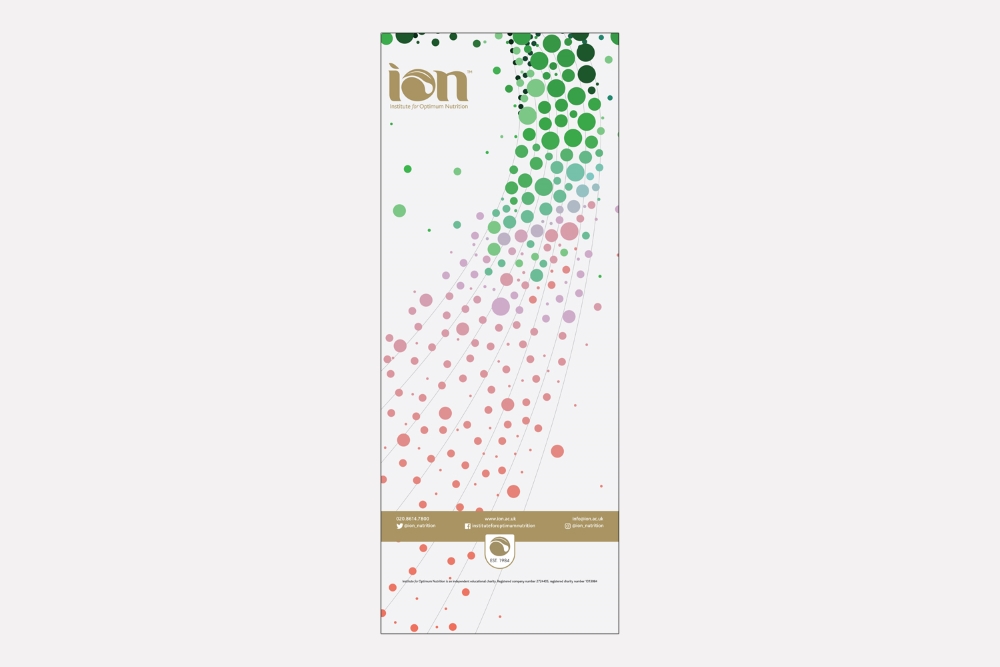 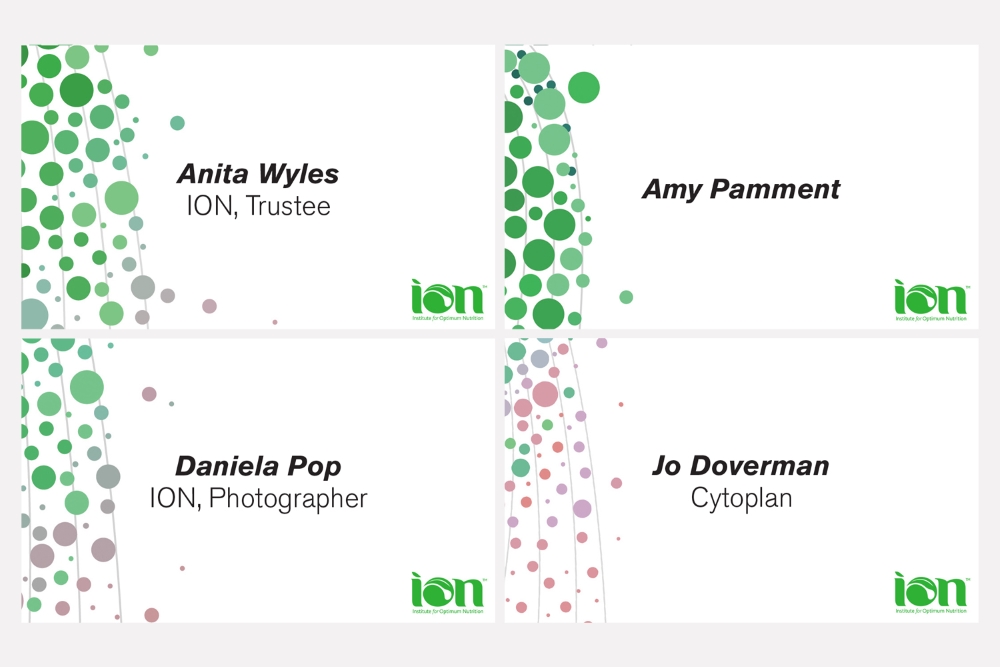 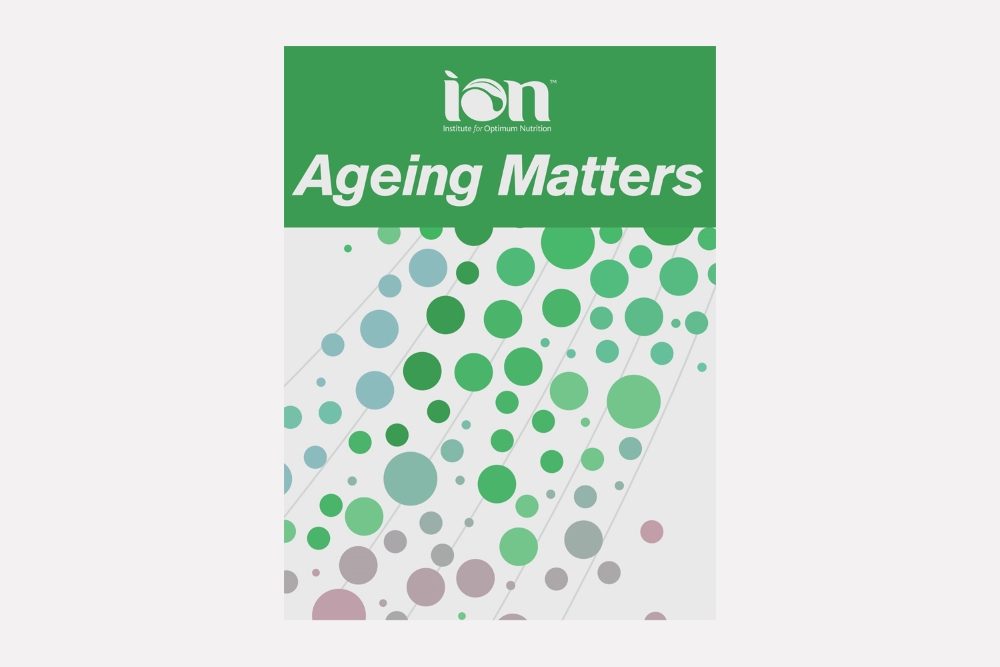 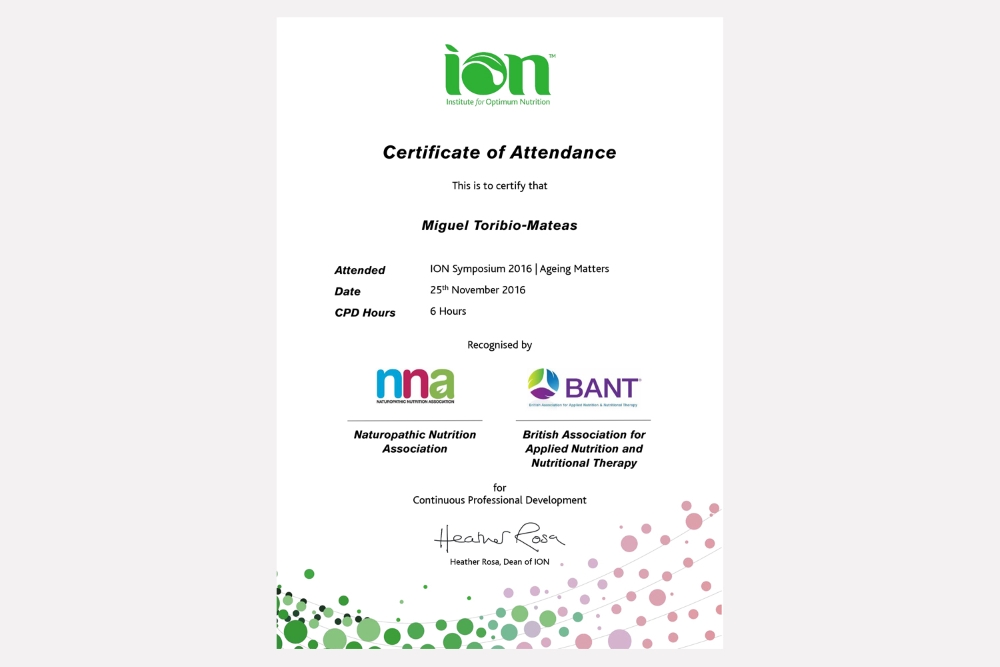 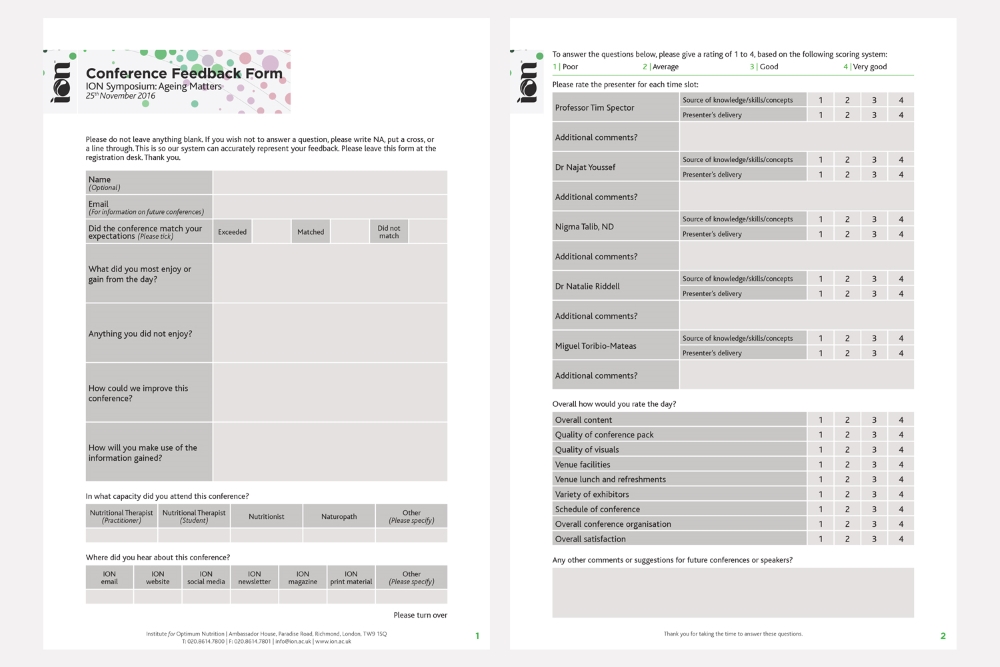 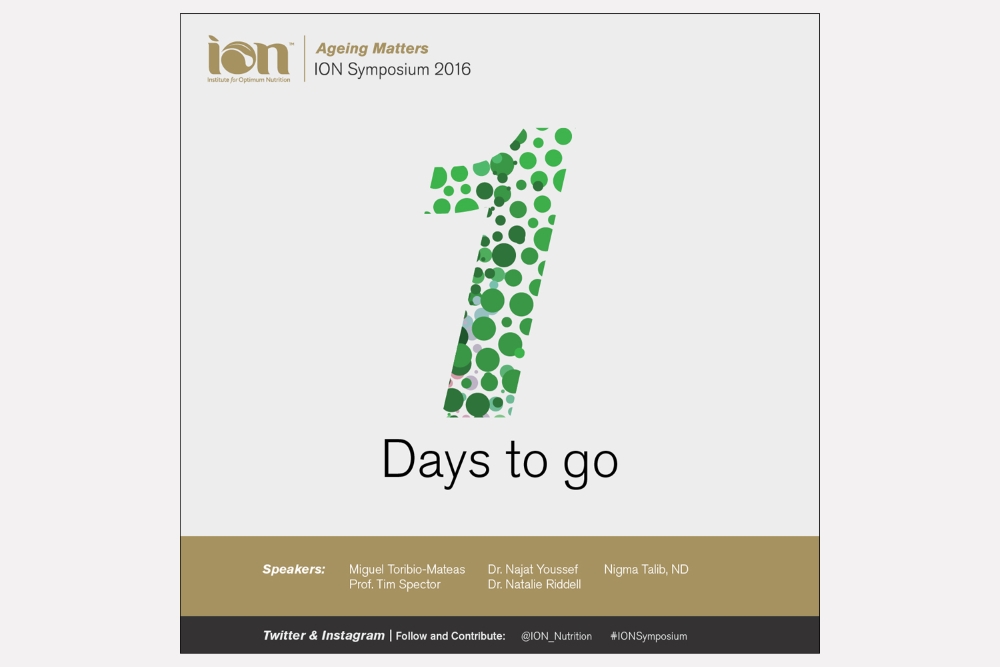 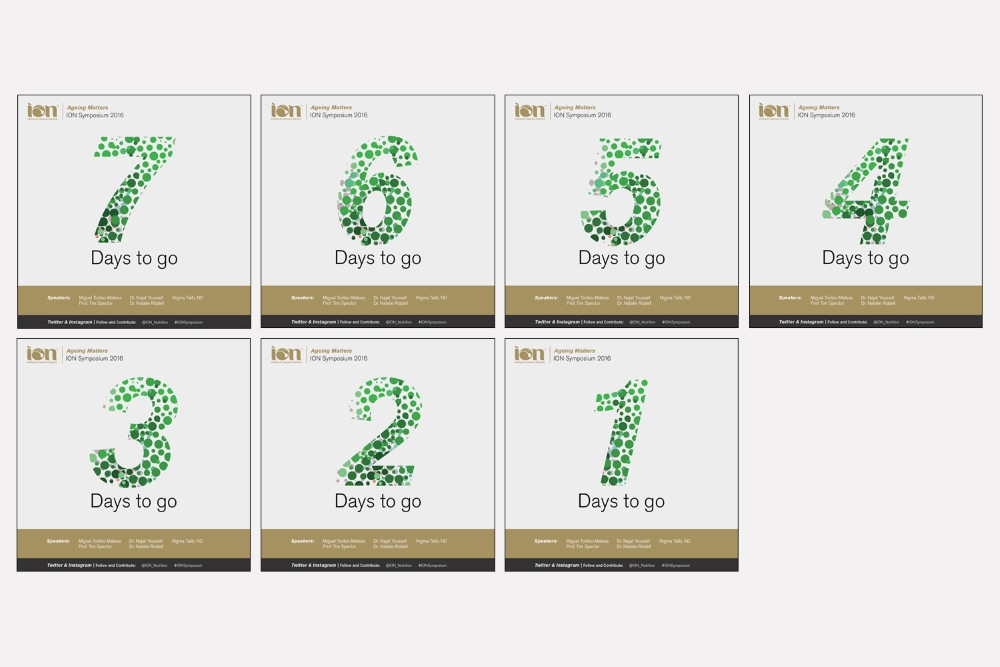 The “X” was to be in the ION green colour, diffusing to a red colour when moving towards the “cap” portion. As overhead lighting in the venue was a concern, I used soft graduated greys for the backgrounds and tried to avoid white where possible. This also created a nice visual hierarchy between elements (on screen, print, etc).

Fonts used were (the ION house font) Bliss and Futura.

In some of the digital elements to give a dynamic and polished vibe, and to make the elements feel “alive” and subtly “breathing”, the circles would fade in and out and slowly travel along paths.

Then, to make everyone feel “unique” the name badge and certificate patterns were designed to have the circles randomly place (within their graphic areas) on each element, so no two were the same. The paths were differentiated between the four attendee types to create a visual distinction between professions.

Lastly, a single-colour print was selected for the tote bags as it greatly reduced cost. This obviously meant a new approach was needed to differentiate between the telomere and regular DNA structure – so I varied the size of the circular elements.

To keep costs down some elements were sent to the printers (CPUK Print Publishing) while others were printed in house using the Xerox C60 Fiery equipped printer.

Items printed in house included badges, certificates, feedback forms, pamphlets and venue signage. This meant accounting for bleeds and margins where possible and where not possible.

We encouraged attendees to post about the symposium on social media. Backstage, I curated them in real time via a third-party platform and these were displayed throughout the day across the venue.

The tote bags were used as goody bags to give away to the attendees. They contained all the educational material relevant to the symposium, as well as items from the sponsors (vitamins, supplements, books, etc). We also included previously produced brand assets (for example postcards, magazine issue, pens, etc), which complemented the symposium branding. 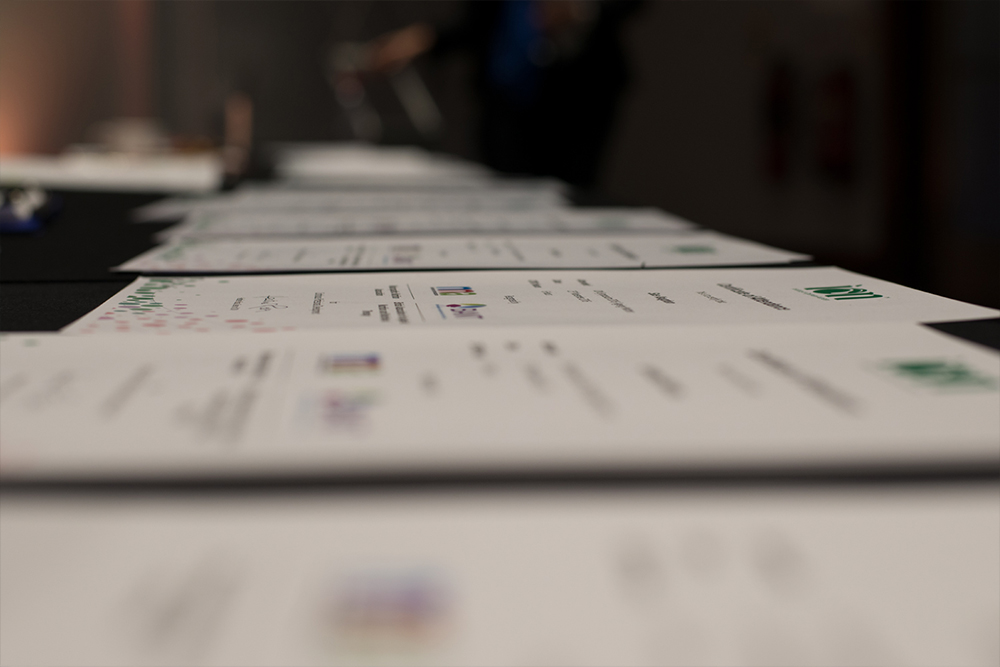 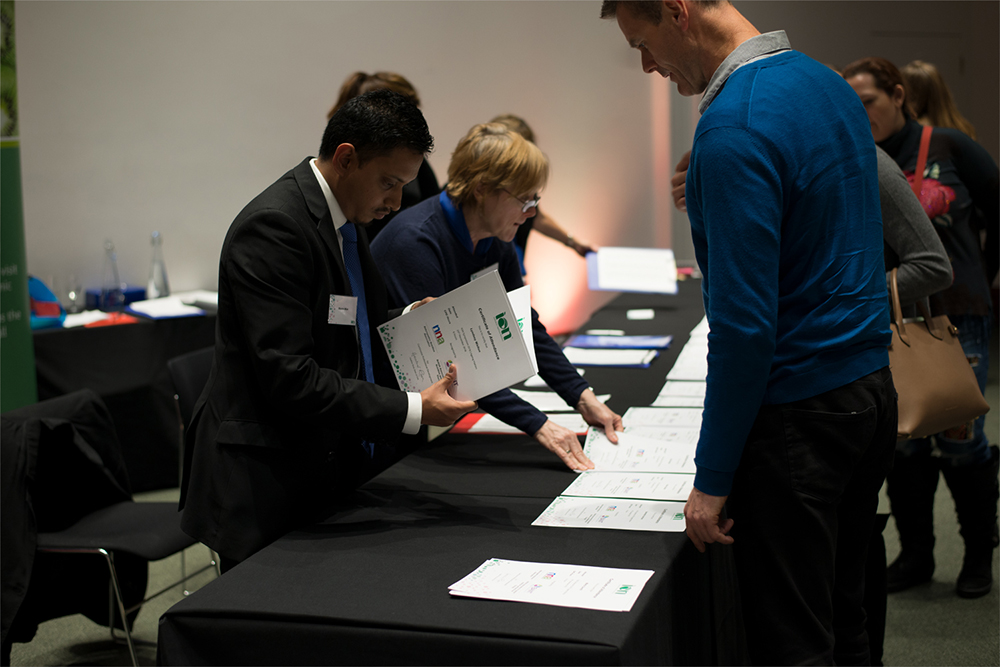 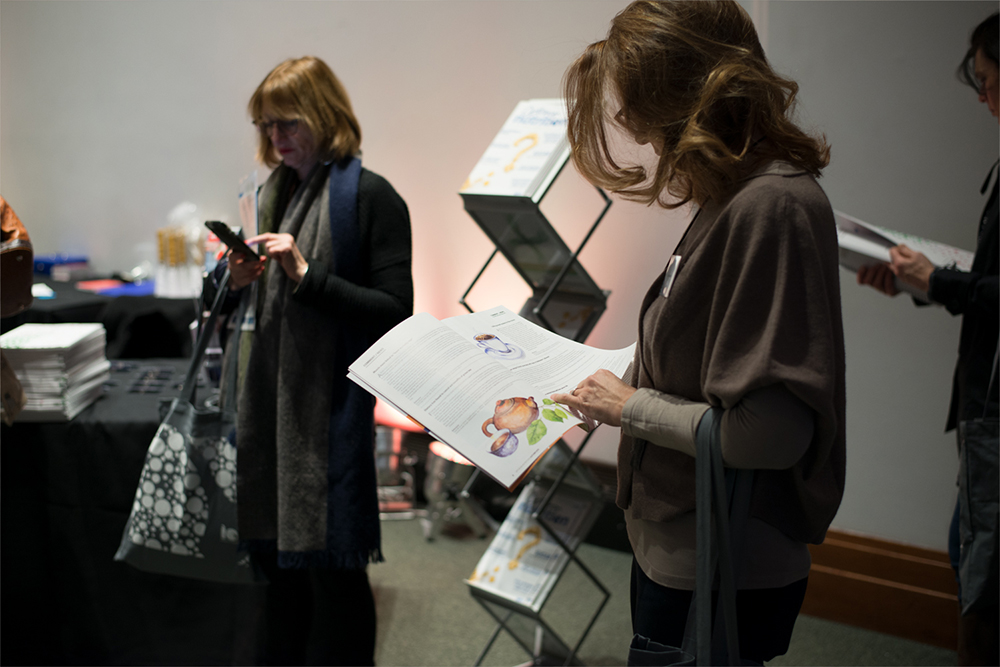 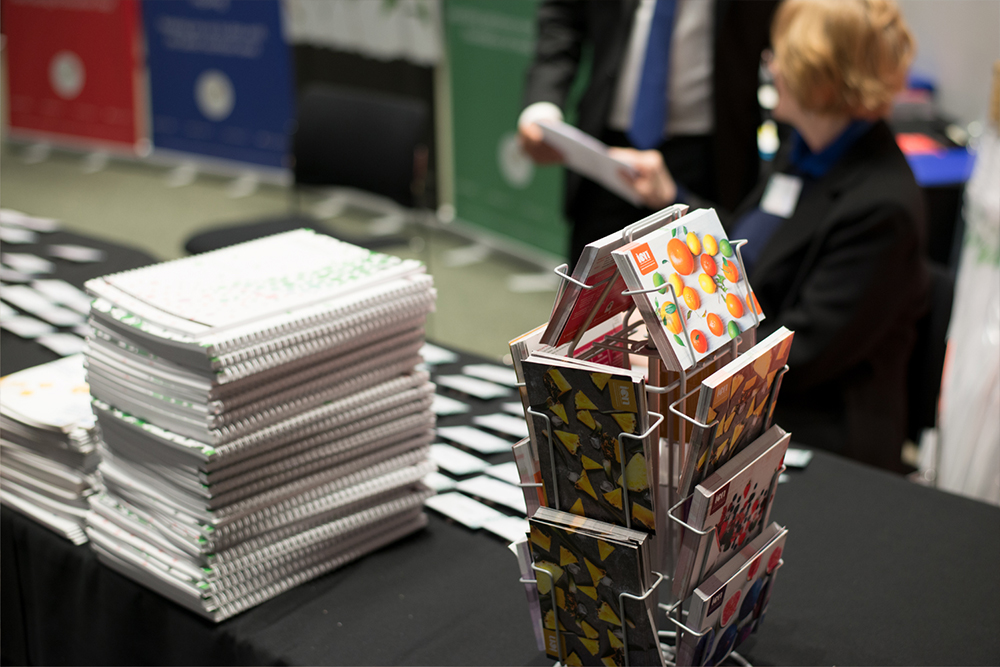 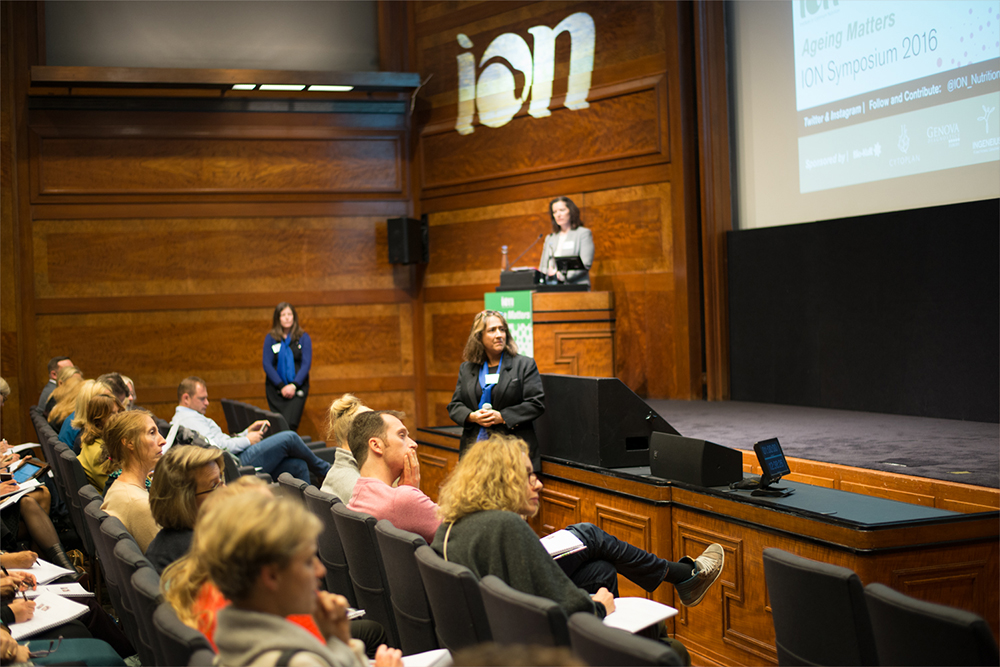 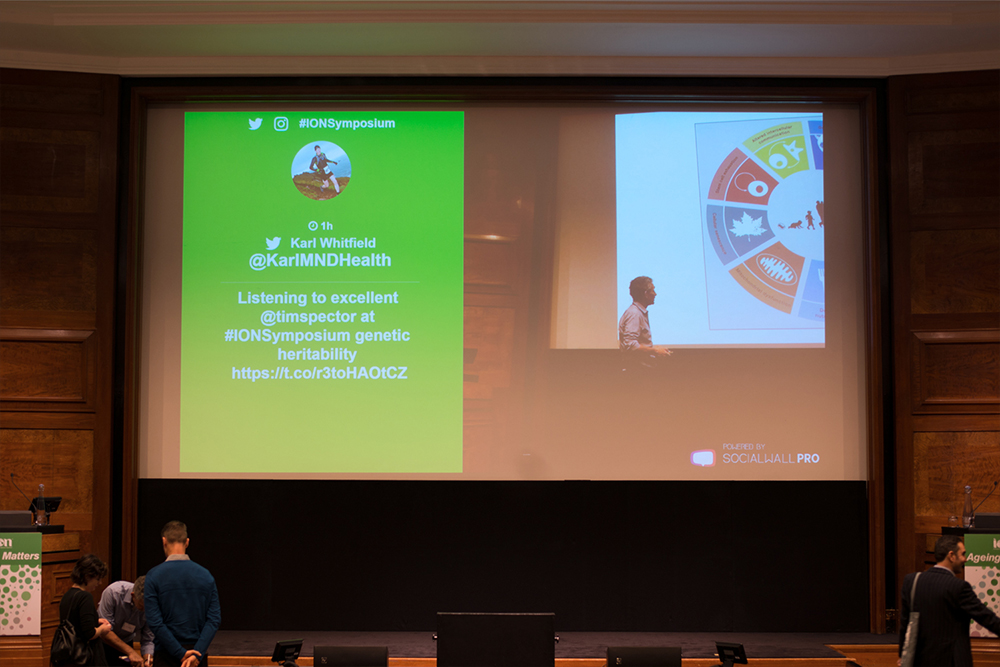 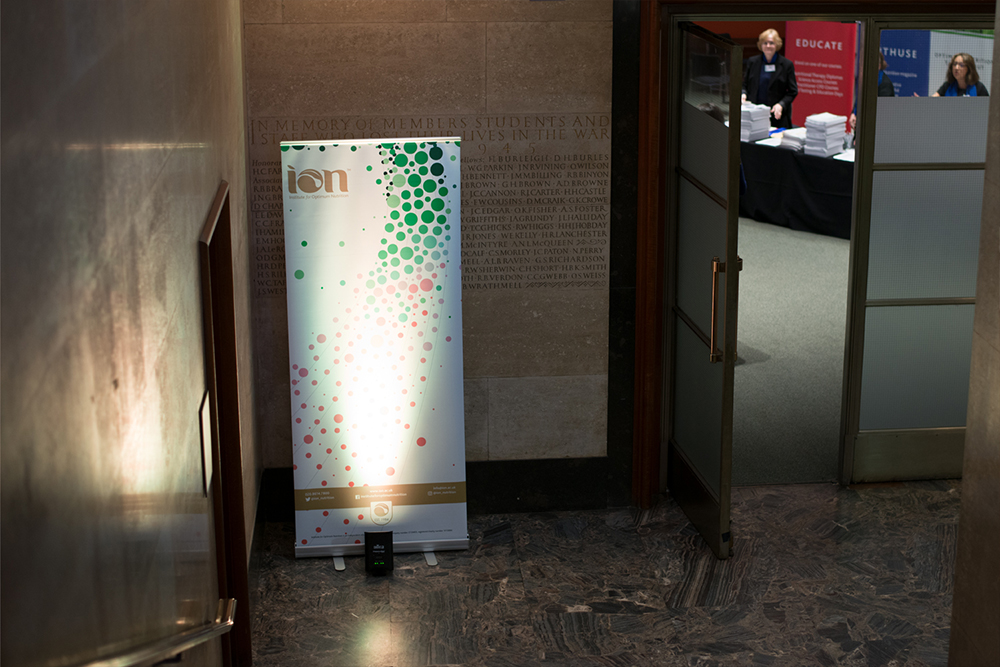 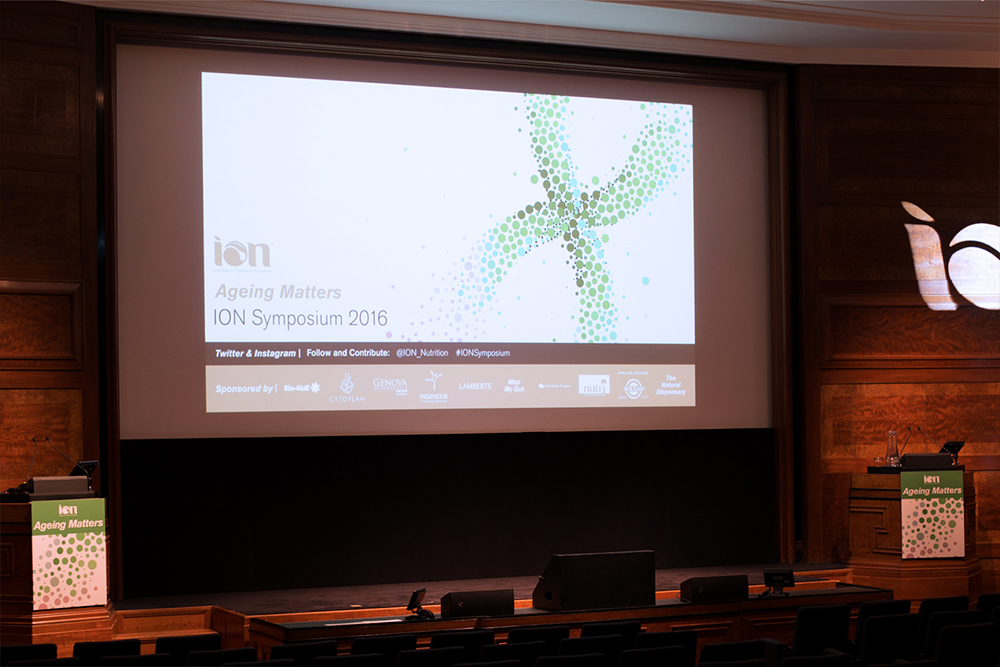